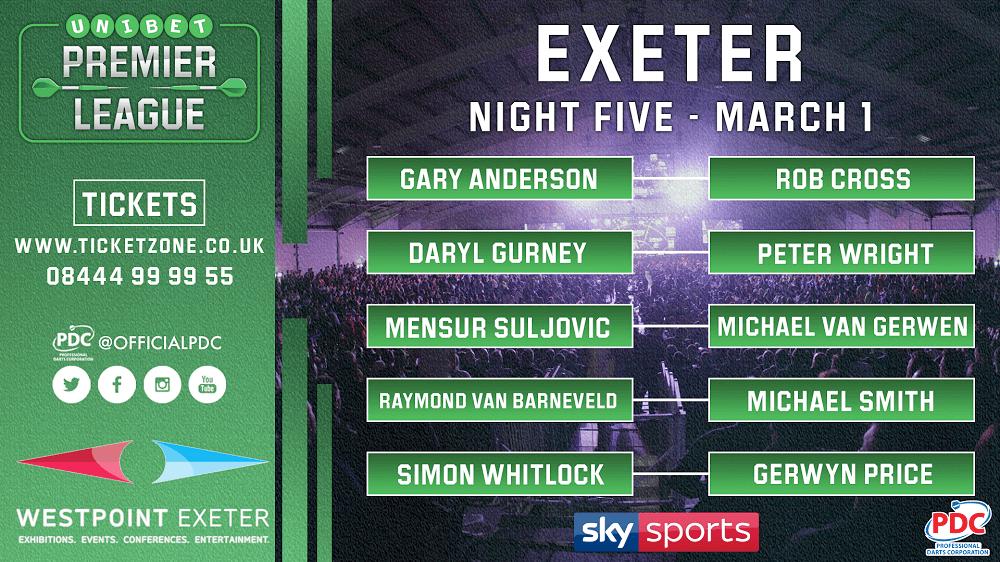 REIGNING Unibet Premier League champion Michael van Gerwen will face new World Champion Rob Cross on the opening night of the 2018 season on Thursday February 1 in Dublin, with the fixtures for the first nine weeks confirmed.

Ten stars of darts will begin their quest to claim the prestigious Unibet Premier League title at Dublin's 3Arena next month, with the 16-week campaign being broadcast live on Sky Sports and worldwide.

The season will include Judgement Night after nine matches where the bottom two players in the table are eliminated after the players have faced each other once in the league phase.

The remaining eight players then continue their battle to secure places at May's Play-Offs in London, where the top four from the final league table will compete for the title.

The opening night on February 1 will feature the high-profile meeting between Van Gerwen and Cross, who recently played out a classic World Championship semi-final which went to a sudden-death leg at Alexandra Palace.

The second league night, to be held on Thursday February 8 at the Motorpoint Arena in Cardiff, will see Welsh ace Price take to the stage in his home country against Anderson.

Van Gerwen plays Wright in a repeat of the 2017 Premier League final, Cross takes on Suljovic, Van Barneveld plays Suljovic and Smith will clash with Gurney.

The third league night, at the Metro Radio Arena in Newcastle, will be headlined by the repeat of the 2015 Premier League final and 2017 World Championship final as Anderson meets Van Gerwen.

The players ranked second and third in the world, Wright and Cross, also come head-to-head in Newcastle, while Suljovic plays Smith, Gurney takes on Price and Whitlock faces Van Barneveld.

Night Four on Thursday February 22 sees the tournament visit Berlin for the first time, with over 10,000 fans set to pack the Mercedes-Benz Arena.

The visit to the First Direct Arena in Leeds on Thursday March 8 will include World Champion Cross playing former World Youth Champion Smith, with the pair having also recently clashed in a thriller at the World Championship.

Van Gerwen will take on Australian face Whitlock, Wright plays Suljovic, Price meets Van Barneveld and Anderson takes on Gurney in the other ties in Leeds.

Night Seven sees the tournament return to the Motorpoint Arena in Nottingham, where former Premier League champions Anderson and Van Barneveld will face off.

Van Gerwen meets Price, with the pair having contested a classic at the World Championship recently, while Cross plays Suljovic, Whitlock faces Gurney in a repeat of the 2017 World Grand Prix final and Smith plays Wright.

Van Gerwen will play Smith, Gurney takes on Suljovic and Cross plays Price in the other tie on the season's first of two visits to Scotland.

The first phase of the Unibet Premier League season then concludes on Thursday March 29 with Judgement Night at Belfast's SSE Arena.

Wright will play Whitlock, Anderson faces Suljovic in a repeat of the 2017 Champions League of Darts final, while Smith plays Price.

Following Judgement Night, the remaining eight players then do battle for Play-Off places by facing each other once more in the league phase, with fixtures to be confirmed after the Belfast event at www.pdc.tv.

Tickets for the Unibet Premier League are available via www.pdc.tv/tickets.

Fixtures from Week Ten onwards to be confirmed at www.pdc.tv following Judgement Night.