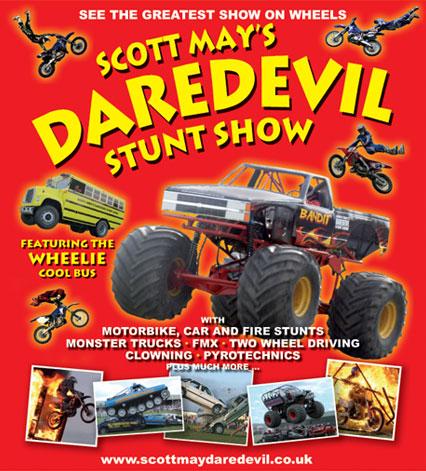 Scott May’s Daredevil Stunt Show, Europe's largest touring stunt show, will be performing a Firework and Stunt Spectacular. The big difference from our normal stunt show will be the pyrotechnics and special effects incorporated in the stunts and on the stunt vehicles. The show will climax with a firework finale.

Spectators will also witness their incredible two wheel driving display using a quad, buggy, car, van and, believe it or not, a lorry on two wheels at some venues (where the ground conditions are suitable)!

The show features The Wheelie Cool Bus, which weighs in at around 15 tonnes and performs incredible balance wheelies across the arena.

We have a Freestyle Motocross ramp system, where you can see some of the UK's top FMX riders flying between ramps at heights approaching 40 feet, pulling off insane tricks and manoeuvres. This will be an adrenaline-fuelled, high-flying performance which will amaze the audience and will, undoubtedly, be one of the highlights of the show.

Scott May has been touring with his stunt show throughout the UK for 28 years and brings an unrivalled reputation and level of skill to his daredevil show. In the last few years, Scott and his team have completed nationwide tours of England, Scotland, Ireland and New Zealand.

Scott's stunt team demonstrate incredible skill and precision throughout a show that is a thrill to the senses. Feel the ground rumble under your feet with the extreme power and roar of the monster trucks. Hear the twisting metal of the car crashes. Smell the burning rubber of the full throttle motorcycle stunts. See the greatest show on wheels!

Those spectators daring enough to ride in one of the show's mega monster machines have the chance to win a ride in Europe's only ride-on monster truck. The truck, aptly named 'Slaine', has 10 seats in the back to thrill the lucky winners who dare to enter the draw.

As well as a ride on monster truck, there is a second monster truck, "The Bandit", and an adapted tracked vehicle, "ThunderTrax", which both cause massive destruction. Other exciting features of the show involve fire, pyrotechnics and the infamous Stunt clown, who will be bouncing into things and causing trouble wherever he decides to get involved.

Tickets are only available from the gate on the day of the show (there are no advanced tickets).