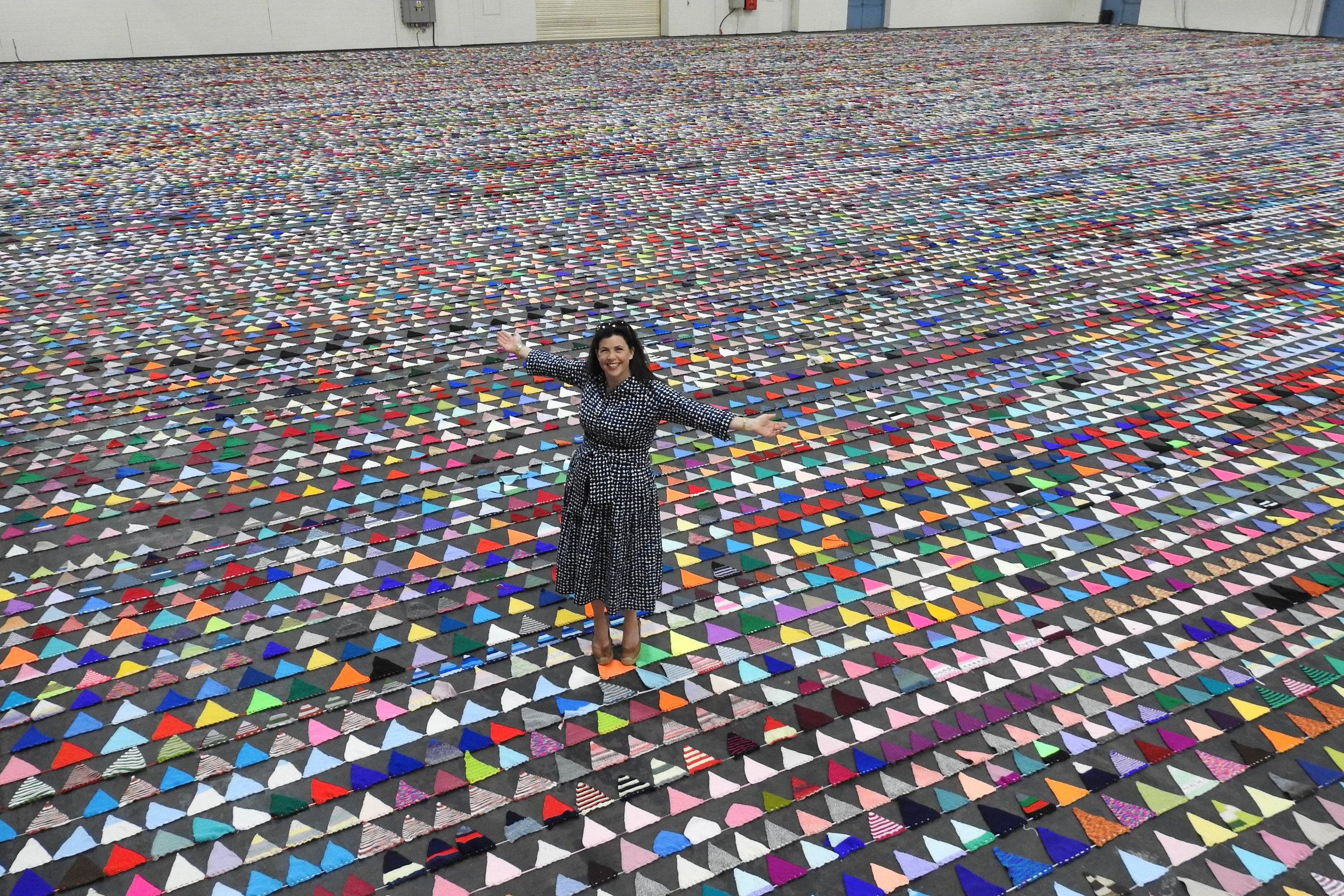 The Devon County Show has, on Monday 25thMay, measured a line of knitted bunting which has almost doubled an existing Guinness World Record in length.

79,001 knitted flags were created by thousands of contributors from across the world, way over double the amount made by the previous record-holders, according to Deborah Custance Baker, Chief Steward for Crafts & Gardens at Devon County Show who came up with the idea and lodged the attempt with Guinness World Records.

A continuous line of bunting was laid out, with each knitted pennant positioned at no more than 2 inches apart, across the 4590 square metre floor space of Westpoint Arena in Exeter. The measuring was performed by Chartered Surveyor and official measurer, Will Morrison from Strutt & Parker in Exeter with a measuring wheel and a total of 14,279 kms in length was recorded, verified by Will Morrison and witnessed by thee adjudicators – Lord Devon, Cllr Phil Twiss and TV Presenter and crafter Kirstie Allsopp.

The existing record is held by Upton House and comprises 31,119 flags and measured 7.5kms in length.

Deborah Custance Baker said: ‘The crafts and garden marquee is one of the most popular sections at Devon County Show and all of our stewards and visitors are really hands-on.  Every challenge we’ve set them so far they’ve not only succeeded in achieving, but have blown our expectations out of the water.  The bunting is no exception.  We cannot believe people’ s dedication and commitment to the task.  We thought we might just beat the existing record but doubling it is a truly astonishing feat.’

We do know that this is partly to do with lockdown.  Many of our contributors have commented on how knitting has really helped them through this difficult period of self-isolation by giving them a sense of purpose.  Several who had committed to making just a few, suddenly found they had both the time and inclination to double, even triple their original pledges.’

Witness to the record, Kirstie Allsopp, although known for her crafting capabilities has never mastered the art of knitting.  She said: ‘This staggering amount of bunting is just incredible and has really given me an incentive to give it one more try!’.

Commenting on the logistics for the record, Deborah said: ‘We originally wanted to do the stringing and measuring at Exeter Cathedral with as many contributors who wanted to help as possible.  As it was, we weren’t able to do this.  I’ve had to have all the bunting delivered to me at home, and I’ve literally been drowning in it, and done all the stringing myself.  Westpoint seemed like a great alternative to measure the record.  It’s an enormous, covered event venue which due to the pandemic is currently not in use and has enabled us to lay out the bunting, which has taken a full two days, whilst remaining compliant with social distancing regulations.’

Originally the bunting was due to be suspended inside the crafts and gardens marquee at Devon County Show.  As the 2020 show had to be cancelled, the bunting will remain in Westpoint until September.  The local community will be invited to see the record-breaking bunting in its full glory on designated evenings throughout the summer.  They will be offered the opportunity to purchase sections of the bunting to help raise funds for the Devon County Show’s charity of the year, farming charity The Addington Fund.  The bunting will also be donated to local causes.’

Now that the bunting has been measured, all the documentation will be submitted to Guinness World Records and verified before the record can be made official.